How do you celebrate Christmas?

I have been looking at some blogs recently that tell how different people celebrate their Christmasses around the world. It's really quite interesting to read about how vastly different our traditions are! I guess we get into this little space where we think that everyone celebrates just like we do, so we don't share how WE celebrate.

On that note, here is how my family and I celebrate Christmas here in Ontario, Canada. To us, Christmas is all about family. We send Christmas cards to family and friends, and shop for gifts to give our loved ones to brighten up their day. These gifts are all wrapped in bright paper and put under our tree! We have a 7 1/2 foot fake tree ( I don't like the idea of killing a living tree so I can put it in my living room and burn it after I am done with it) which my boys decorate each year. 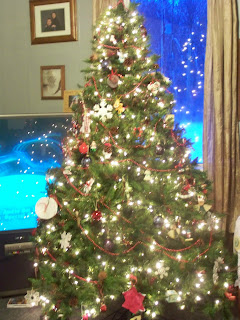 On Dec 24th, we have tourtière for supper. This is a meat pie. I read somewhere a long time ago that it was the traditional French Christmas eve dinner, so I started making it for Christmas eve. I don't know if it really is the French traditional dinner, but it's a tradition for us now! 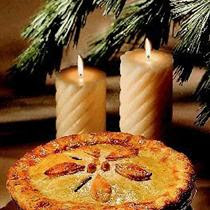 Some years, we go to Niagara Falls and check out their light display, but we haven't done that in a couple of years.

We usually open one gift on Christmas eve, because we just can't wait! The boys will be shaking and squeezing their gifts in anticipation of Christmas morning, and choose just one to open early.

I will tell you in another post how we actually celebrate Christmas Day, since this is getting rather long and I do need to go finish what I was doing in the kitchen now :)

My Uncle passed away yesterday. He had a brain tumor, and really didn't linger that long after it was diagnosed, only a few months.

Uncle Randy was the fourth born, only a year older than my Mother. He was 58. He had very blue eyes, and a red beard.

I didn't really know my uncle, as he lived in a different province than we did for many years, but I am still sad that he has gone so soon and so quickly.
My boys when we went to visit him last Friday: 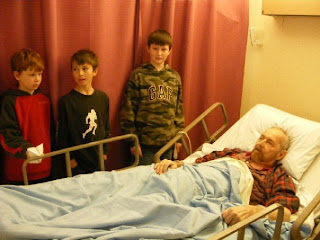 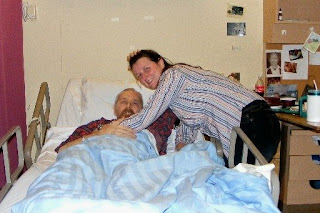 I am trying to lose some weight. When I started, I put my goal at 50 pounds. Well, I am officially over halfway! As of this morning, I've lost 26 pounds. It feels so great! (well, not the jiggly loose belly skin part, but that'll go away)
Before I started: 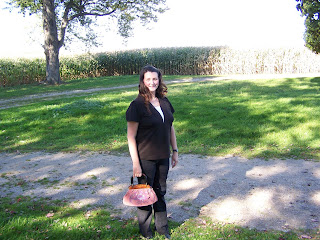 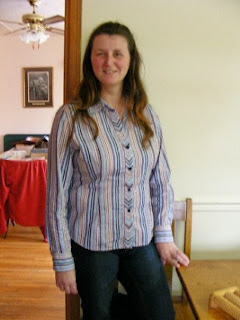 Yesir, I've made 100 posts! I still have no idea where this blog is going, but I'm having fun getting there!
We still have an overabundance of winter here. It's been quite cold and snowy. I've been spending lots of time inside keeping warm, doing wintery things like baking and quilting. The boys have been having lots of fun outside playing in the snow, building snowmen, igloos, and sledding.
I don't really have much to blog about today, seeing as how I've been indoors most of the time! The christmas Concert is at the school tonight, so I guess I'll be going to that.
Hope you've had a good week!

Ok I guess today's post is a political opinion post. I know that there are many, many political opinions out there, and each one is probably right. I don't claim to follow politics all that closely, and didn't even vote *gasp* until the last two elections. I was raised in the belief that God chooses the powers that be, and we have no business trying to out- vote God. Which is true, God WILL choose our prime Minister, and he still leads each country, even if that country does many, many wicked things and rejects him. But I get side tracked here. I started voting when someone said to me "it is true that God will choose our Leader. But he doesn't expect us to let our voices be silent and allow sin to rule. He put us in a free country with the right to vote for a REASON"
All of this does have a point, I promise LOL.
As I am sure you know, the world is in a time of economic turmoil. People are losing their jobs, homes, vehicles, and struggling to feed their families. It is NOT a time we want to see our leaders bickering, being power hungry, or unstable. We NEED our parliament to be STRONG, and UNITED, and pulling for the Canadian people. Instead, they seem to be disagreeing about how best to throw or not throw money at a problem in the hopes it will solve the issues that are plagueing the whole WORLD.
I have an idea... what if, instead of throwing 30 billion dollars at the auto industry, the Government starts a subsidy program. Get people BUYING cars. If I go buy a brand new vehicle, I will have a payment of what, 350- 500$ a month? I can't do that. I don't have a spare 350$ a month to put into paying for an overpriced piece of metal that will have no value at the end of paying for it. So, help me buy a new car. (Not "me" specific, "me" the average Canadian) If the car is subsidized (say, half), I'll be more likely to buy new, buy more often, and therefore, the auto industry is helped out without giving a direct handout. It would stimulate the economy as well. I know that this solution would not completely work, b/c Canada is a smaller part of the NA market, and it still might not make people buy new vehicles., but it just seems smarter than throwing our money at a huge corporation. Just my 2 cents LOL
Ok, on to the Coalition people. I know it's legal, I know that other countries have done and are doing it. I do not want it here in our Democratic country where only 6?,7? weeks ago, people said we want the Conservatives! they said very loudy that they did not want Stephane Dion. There's a REASON the liberals lost almost a MILLION votes since the last election.
This is starting to sound a bit Ranty, sorry! Just for the record, I didn't vote Conservative in the last election~ but that is who won, fair and square. It isn't Right to take advantage of an economic crisis to try and push you power agenda and topple a government, and I hope the Canadian people tell the coalition leaders loud and clear that we have voted, and leave thing be!!

We broke out the tree! G put it up, and the boys decorated it :) 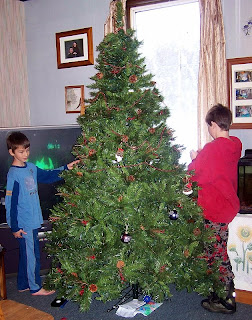 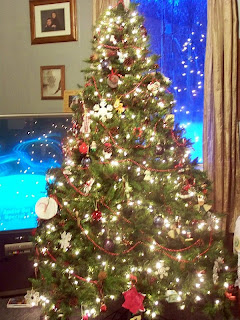 I know by Dec 26th, I'll be sooo ready for it to be gone, but today I am really liking it!