I have COMPANY!!! I love it... we've had super Mario (the real, OLD nintendo Super Mario!) wars, played duck hunt, eaten pizza, stuffed ourselves on yummy christmas baking, shopped, had birfday cake, gotten exciting presents,  riled up all the kids, and had such a great time!
My Christmas wish is for my whole family to live close together so we can do this more often :D 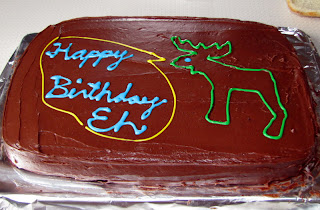 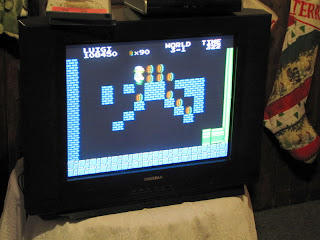 I love the way it smells! My brother's birthday is tomorrow so i am making a cake for him as well. My kitchen smells like chocolatey fudgey goodness! 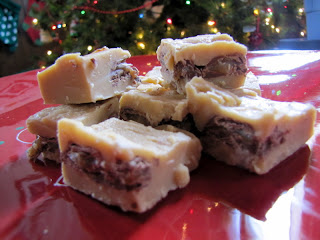 When life hands you earwigs...

the company sends you gift cards!
Yes, I found an earwig in my french fries. Well, not exactly *my* french fries, Kyle's, to be exact. It was big. and ugly. and oh, so disgusting to see in his supper. I called the company who made the fries, and they sent me a gift card for about 10 times the amount the fries were worth!
and I thought this part was funny.... the gift card had lemons on it heehee
Went on a photo shoot yesterday, with my friend who is starting to do photography in a more serious way. She snapped a few of me, and this one turned out quite well, I think! 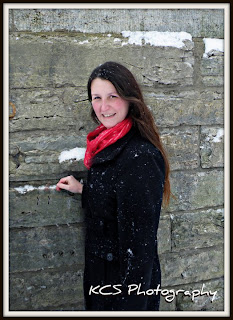 Only four more sleeps until my brother and his wife arrive at my house for Christmas! 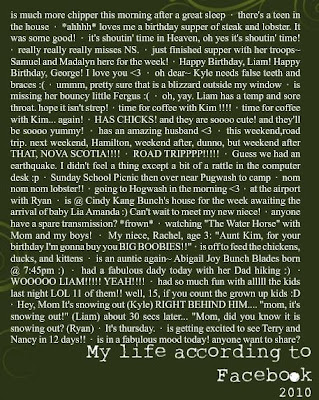 When did THAT happen?

I have a baby. He's chubby, cuddly, and just learning to walk.he can say "mama" and "da" and "bath" and "no". This morning, he said "Mom, I'm having my high school orientation today"

WHEN DID THAT HAPPEN??????
He came home from school just about glowing with excitement about the high school~ the tech, the music, the science programs available to him there. he also, unfortunately, said someone tried to sell drugs to his best friend.
I hope he is still as excited about the programs when he is actually in the school doing the work!

The wages of sin

The Bible verse says "The wages of sin is death" (Romans 6:23) It's true. everyone dies.
This isn't a post about death, though. It's about the "now" wages of sin.
When I was (I think) 11, Mom sent me outside to play. I didn't want to go, I whined and gave her a hard time. but I went. ooooh... what was this? My little sister and the neighbour boy playing with the axe! Dad told us not to touch that axe! Pride reared up... I had to RESCUE her from her sin of disobedience, before she got hurt. So, I took the axe from her, not even thinking that I was sinning just as much as she was. How often do we justify our sin? "It was necessary...I couldn't help it...I would be laughed at...there was no other choice" and on and on we go.
In taking the axe from my sister, I was being disobedient and proud. I thought I knew better, I was big, I was above the rules. I was justified in my actions. I was "saving" my sister, but doing it the wrong way.
I drove the axe back into the chopping block. Only, the block was FROZEN. Now, I don't know if you've ever tried to chop frozen wood, but it just doesn't work very well. At least not when you are 11 and a scrawny girl. That axe handle bounced up and knocked out my front tooth.
That one moment of sin has cost me. I've had at least four dental surgeries since then. I need another, where I will lose more teeth.
The "wages" of my youthful sin have been annoying, expensive, and even painful, but imagine how much more serious the eternal wages of ignoring God will be. God tells us to come, believe, accept, be clean and live  in his word.
I am so glad that the verse continues.. "The wages of sin is death, but the gift of God is eternal life, through Jesus Christ, our Lord" The wages have already been paid in full, no cost, or pain, or annoyance is required to heal your poor sinful soul!

Well the weather outside is frightful

But playing in the snow is delightful!
We were hit with a whomp of wet packing snow, so we took advantage of it to build a big snowman. It was a great family time, with snowballs flying and much laughter. 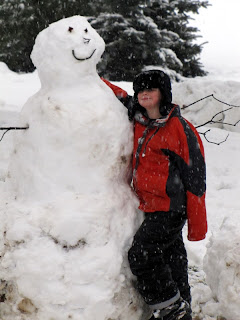 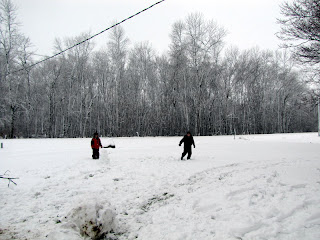 Unto us a Saviour is born

Luke 1 KJV
1 And it came to pass in those days, that there went out a decree from Caesar Augustus, that all the world should be taxed.

2 (And this taxing was first made when Cyre'ni-us was governor of Syria.)
3 And all went to be taxed, every one into his own city.
4 And Joseph also went up from Galilee, out of the city of Nazareth, into Judea, unto the city of David, which is called Bethlehem, (because he was of the house and lineage of David,)
5 to be taxed with Mary his espoused wife, being great with child.
6 And so it was, that, while they were there, the days were accomplished that she should be delivered.
7 And she brought forth her firstborn son, and wrapped him in swaddling clothes, and laid him in a manger; because there was no room for them in the inn.

Another first! Yay me!

It is really getting down to the wire now. Just three weeks left in 2010, and three slots left in my "get out of your box and do stuff" 2010 resolution! Can I do it? I really am a last minute person. In fact, my yearbook quote was one my Mom always said suited me best~ "if it weren't for the last minute, a lot of things wouldn't get done". so, here's hoping!
Tonight, though, I crossed off a space on that list. I, miss uncoordinated stiff and middle aged, took a dance class. No, not waltz or square dancing or line dance. No, I chose hip hop. OK,so the free first class may have had something to do with it, but I gave a try at actual dancing with an actual teacher! shout out to teachers Aisha and Jeoff at the Pyramid Center for their great work out!
yep, one more off that list! no photo, though, as I completely forgot to bring my camera. Thinking maybe I'll actually sign up and take the class :)